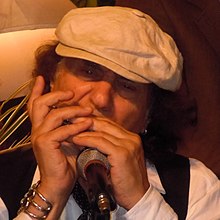 Born: London, United Kingdom
Nationality: British
Occupation: Fashion Designer, Musician
Peter Golding created the first ‘designer jean’ in 1970, opened his clothing store ACE on London’s King’s Road Chelsea in 1974 and created the world’s first stretch denim jean in 1978. He was the first fashion designer to be invited to join what is now known as the Chartered Society of Designers, and in 2004 was invited by The Queen to Buckingham Palace in recognition of his contribution to British design.He has been described by Fashion Weekly as “the Eric Clapton of denim’.[1]

Beginnings and the Beat Hotel, Paris 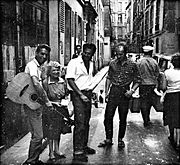 Golding came from an academic family background, and became a clothing industry management trainee and production manager in his teenage years. An early trip to Paris saw him busk in the streets on blues harp and guitar, and take up residence at No. 9 Git le Coeur, later known as the Beat Hotel,[2][3] a renowned hangout of Anglo-American beat artists and performers. Peter features in books on the beat generation by Harold Chapman [4] and Mike Evans.[5]

On his return Golding worked for the Rael-Brook shirt company as a designer, combining his technical experience with his artistic background, before setting up one of the first professional fashion design consultancies with offices in Old Burlington Street, then Savile Row. He attracted international clients such as Viyella International, Phillips-Van Heusen (US), The International Institute for Cotton, The International Wool Secretariat, ICI (UK), Fabwerke Hoechst AG (Germany) and Hystron Fibers Inc (US), McGregor-Doniger (US), Barracuta (UK) among others.

A series of ‘firsts’ followed. The introduction of the ‘Peter Golding’ label was with the first madras cotton shirts from India (sourced while travelling in India and Nepal)and sold through the early London boutiques – Just Men, John Michael and the Westerner and beyond with celebrity customers including the Beatles. The International Wool Secretariat promoted his designs as the first men’s unconstructed clothing collection using double knit-wool jersey and also for Project Adam, chaired by Stirling Moss for the advancement of ergonomic clothing.

In 1970 with a commission from Falmer Company Ltd[6] he created what can be considered the world’s ‘first designer jean’ ‘Peter Golding for Falmer’.This successful line was followed in 1973 with Peter Golding bleached denim jeanswear which was distributed by Jean Machine and Mayfair Fashions in the UK. In that year Golding also exported these jeans and jackets to the United States through the Brittania Company in Seattle thus introducing the first bleached denim jeanswear to America.

Golding was a visiting lecturer at the Royal College of Art, and was invited to join the Society of Industrial Artists and Designers which today is known as The Chartered Society of Designers of which he is a fellow and previously an assessor for student membership both in the UK and Hong Kong.[7]

In 1974, Golding opened his flagship store, ACE,[8] in London’s King’s Road, with sculptures by Andrew Logan and an interior described by European Fashion Guide as “glittering”:

This may be the “hottest” store in the world. There is nothing inside here that does not glitter: the jeans, the shirts, the walls and the people. The black walls shine under silver lights, music plays continuously, and there’s no telling what stars may pop in – Liza Minnelli, Rod Stewart, Bianca Jagger or the Rolling Stones’…models,rock stars,movie people and lords and princesses come here for clothes that Golding designs to be both fun and sexy. Famous are the Golding jeans which fit like a second skin.. Alan Flusser – European Fashion Guide US 1977)

When the store closed in 1984 an advertisement was taken out in Ritz magazine to thank the celebrity clientele – the “Lords and Ladies of the night” which has become known as the “Ace Goodbyes”.[9]

PG’s ACE store was the platform from which Golding created and launched the world’s First Stretch Denim Jean[10] in 1978 which was quickly popular with its British and international star-studded clientele.[11]

Design development and early production began in the mid-1970s, as a response to the changing profile of the average jeans wearer. Golding found the solution to the demand for close-fitting jeans in a Japanese stretch indigo denim fabric (96% cotton 4% spandex) and then a sateen stretch fabric in black and plain dyed colours.

The original product was launched in the UK through the ACE store and other outlets, but was swiftly marketed in the US with success, stocked by American celebrity retailers including Fred Segal and Bloomingdales, and worn by LA’s Hollywood and music fraternity including: The Rolling Stones, Guns N’ Roses, Fleetwood Mac, Madonna, Jeff Beck, Stray Cats, Darryl Hall, John Oates, Van Halen, Gloria Estefan, Janet Jackson, Steve Miller and many others. His distinctive cuts featured his Rock Fit,Chelsea Cut, Two-way Cut and The Original Stretch.

Production of the stretch jean required an in-depth study of the performance of the fabric – namely shrinkage and stretchability and fit.The Peter Golding brand remained dedicated to the design and technology of stretch denim and other fabrics right through the eighties and nineties into the 2000s,as the brand expanded the range to include numerous jean fits, skirts, and jackets as well as his Ace inspired glamorous T-shirts and tops.

In October 2002, Jerry Hall[12] featured in an article by Hilary Alexander for the Daily Telegraph with photographs by David Bailey to celebrate the 25th anniversary of Peter Golding Stretch Jeans since 1978. British society girl Tamara Beckwith then became the jean’s photographic model, being featured in various press articles[13] as well as in Hello and OK celebrity Magazines.

Peter Golding is also known for his collection of Rock and Roll Art – ‘Inspirational Times’.[14]

A selection went to auction under the title ‘The Peter Golding Collection of Rock & Roll Art’ at Bonhams in New York on 14 May 2008, as a first showing of its kind with a preview tour of the United States in April. The first publicised and curated exhibition for Inspirational Times was held in London in 2003 at Sotheby’s[15] Olympia.

Peter Golding was invited by the Institute of Contemporary Arts The Mall SW1, to participate in their ‘Culture Now’[17] lunchtime series in February 2013. He was ‘in conversation’ with Chris Sullivan, a journalist, contemporary author and commentator, with a discussion and power point presentation of Golding’s fashion and design heritage as well as his music and rock art interests.